skip to main | skip to sidebar

We got through almost all of the list. Some of the items were not completed due to lack of materials (paint, trim, and parts) but for the most part, we scratched everything off the list. We're all wiped out and we even had some help. Vince and Noel came out and gave us an afternoon of their time and Noel even brought food. Thank you guys. It was very much appreciated.
And a very special Thank You goes to Bob Pryor. This wasn't possible without you bud.

Here are some pictures of what we got accomplished in our 3.5 day weekend. 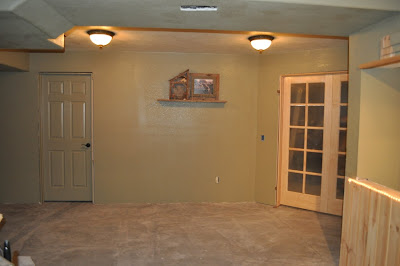 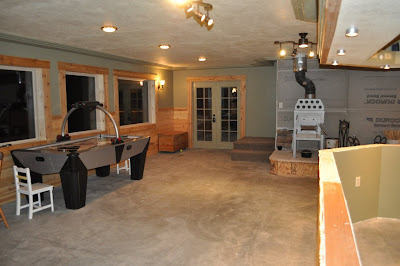 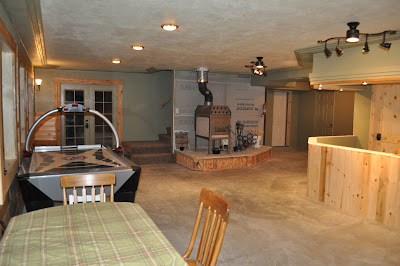 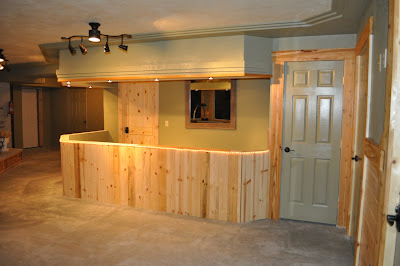 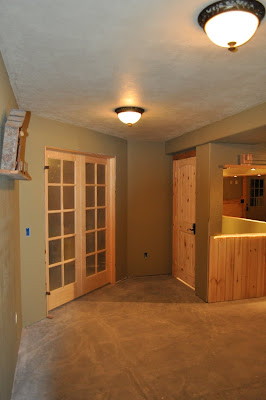 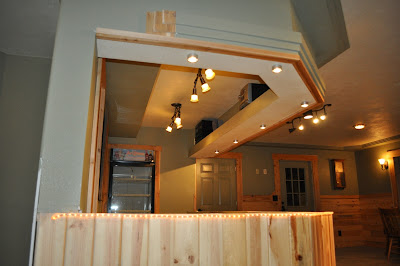 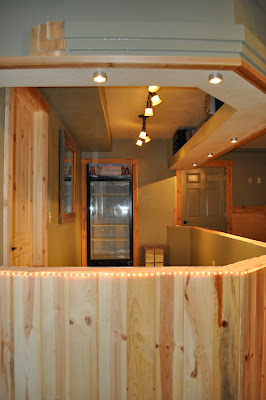 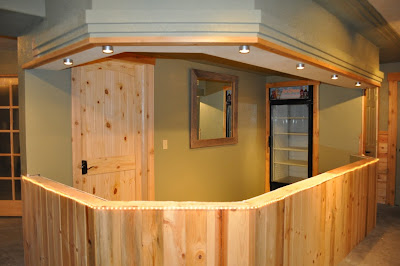 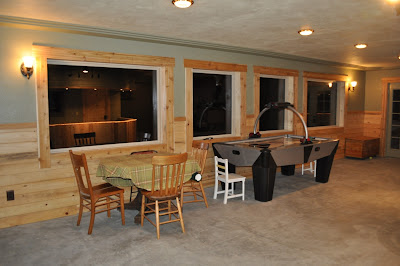 So far I've managed to sneak in a 5 hour nap, build all of the window extension jambs, move all of the cedar trim, finish staining the trim, install the extension jambs, some of the trim, and a little more cleanup. Kelly has been painting like crazy and has knocked a bunch more paint projects off the list. Off to bed for now, tomorrow will bring more progress.
Posted by snowymountainman at 11:13 PM No comments:

1st Progress update---Did a bunch of electrical work, framed in the stairway closet doorway, worked on cleanup in a few places, and Kelly and Kelsey are painting like crazy. Looking like we are going to run out of the Prairie Grass Green colored paint soon. Probably going to plan a trip to town today or early tomorrow. Check the previous post for items scratched off the list.
Posted by snowymountainman at 11:56 AM No comments:

This weekend is going to be a real thrash session. Appraiser is coming on Monday so that we can take advantage of the low interest rate right now. The list of things we need to get done is huge. I typed it up at work and I had to trim it down to keep it on one page! I'll update the list as we go. My hope is that the bar & library areas are complete except for flooring by Monday. Coming off of night shift now so I have a couple of 5 hour energy shots helping me get this thrash started!! Wooohooo....sleep deprivation rocks!!!
Here's the list:

Cleanup
Clean out under stairs---Done
Finish clean out of Kelsey's room---Done
Organize and clean up theater room---Done
Get snowmobile out of garage
Repair power steering on tractor (parts didn't arrive)
Move Tractor to back 40
Move Nissan to back 40---Done
Move Subaru to back 40---Done
Clean up and organize garage---Done
Posted by snowymountainman at 7:24 AM No comments:

Been slacking on my blog duties. There has been a ton of work done around here and none of it has been documented. Since the last update, the drywall sculpture around the bar is finished, the bar patio has been poured, roads to the shed and log yard have been graveled, final plumbing in the master bath done, coax cable (rgb-6) is finished to every room, and we've started hanging doors around Pinecrest Pub. I'll throw in some pictures but there's gonna be some gaps. Haven't been taking as many as I needed too so bear with me. I'll fill in the gaps later.

I also have to give a big Thank You to A couple people. My wife has been putting up with my shit and pitching in more than the average person would ever do. The other person that deserves the thank you is Bob Pryor. He's been slaving away on the drywall sculpture and I have to say, I understand why this isn't in everyone's home. There is a STUPID amount of labor in it. Hanging it is easy. Applying 4 or 5 coats of mud, sanding between each, then caulking it, and then looking at re-doing a coat or two of mud before you can texture it makes it a real job. Been 3 weeks or better of mud/sand/mud/sand...repeat. He has way more patience that I do! Looks great though!
Here's the patio slab forms up with gravel and re-bar in place. 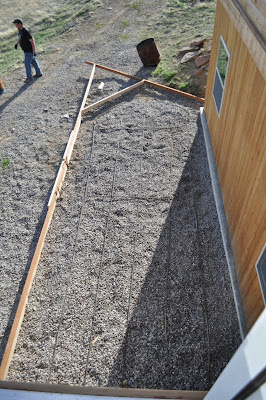 Another shot of the same thing 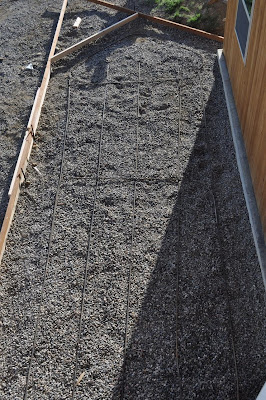 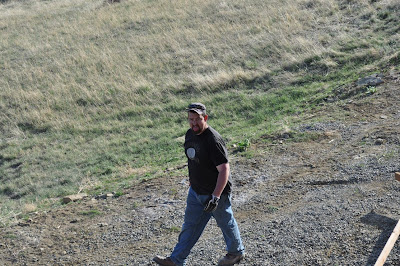 Drywall progress. All the rock is up, most of the joints have at least two coats of mud on them. 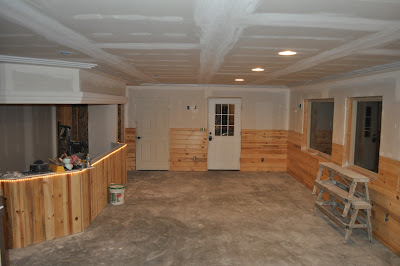 Good shot of the bar and the progress on the drywall sculpture. 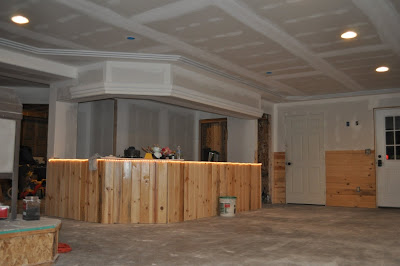 Kelly priming the walls so we can paint soon. 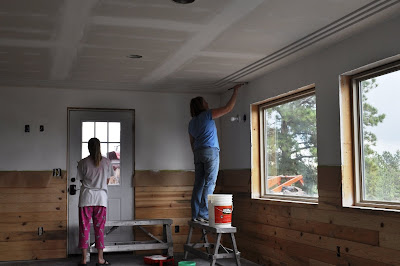 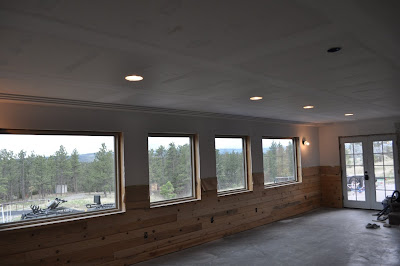 Shot of the wall texture. 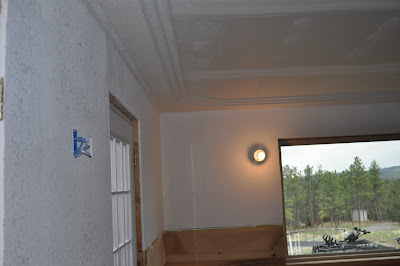 "Pryor Stomp" texture on the ceiling of the bar area. 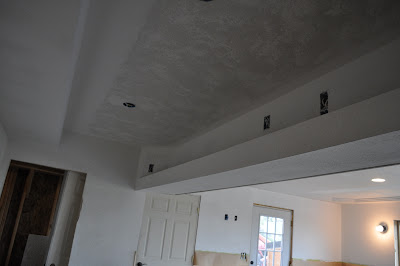 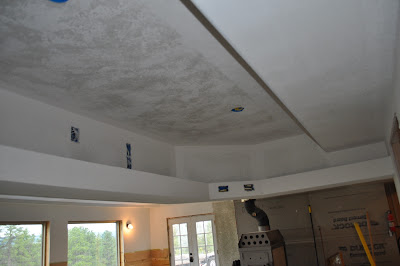 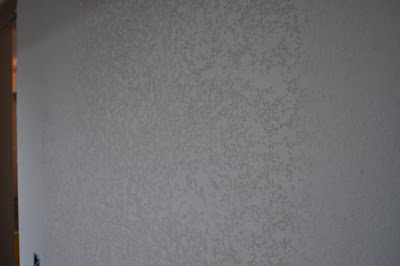 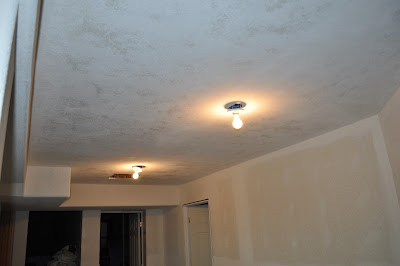 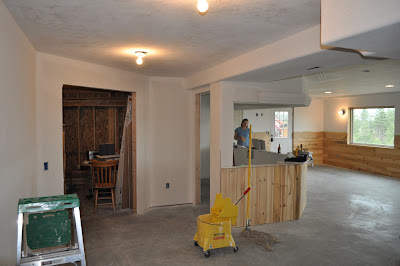 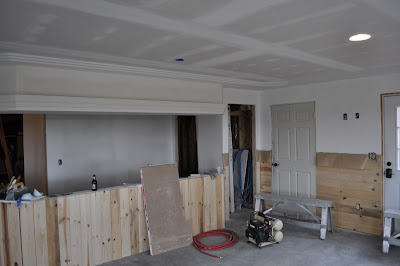 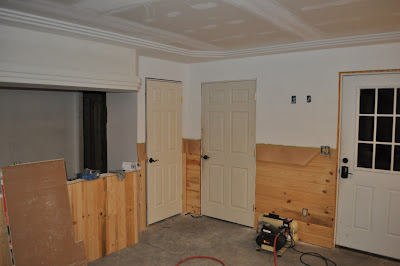 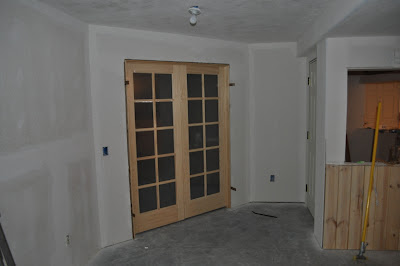 Here's the brains of the outfit. This is called a structured wiring panel. It's the central location for all phone, data, and cable outlets. Inside this box is the biggest mess of wiring you have ever seen, unless of course you are organized and plan it out. We did and it's coming together well. I would like to tell you that it's a work of art inside but we're not quite there. I have to finish up the phone/data end before I reveal what's under the cover. 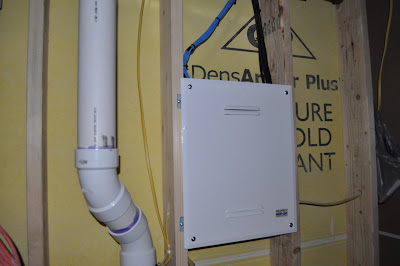 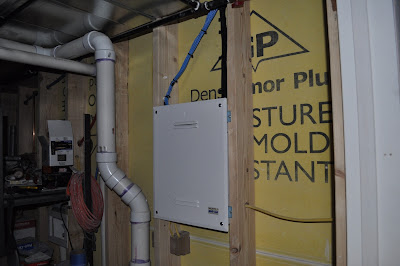 Posted by snowymountainman at 10:24 PM No comments:

The log home we are building is the Grand Montana (package from Paramount Log Homes) on a full basement. Approximately 5200sq' when finished, will feature an open floor plan with 5 bedrooms, 3 bathrooms, 2 fireplaces, tongue and groove pine/cedar interior, and windows to highlight the views of two mountain ranges (Beartooth & Prior Ranges) and the Yellowstone River.

Construction will incorporate "green" features such as insulated concrete forms, natural wood trim, high effeciency HVAC system, passive solar heating, and many of the accent pieces will come directly from the logs on the property. 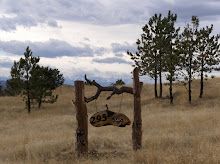